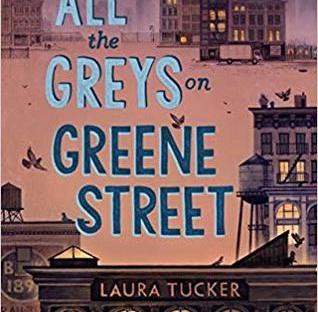 All the Greys on Greene Street was a pleasant read, especially with the tidbits of history thrown in. Who knew mummy brown was actually, at one point, made of real ancient Egyptian mummies…

12-year old Olympia is a precocious child with an artistic bent living in SoHo in 1981. Her parents are both artists, with her father and his friend running an art restoration business. Olympia is exposed to the world of color mixing through the business partner, Apollo, who teaches her which pigments mixed create what colors, and how to tell one color from the next.

When Olympia’s father disappears, thereby throwing her mother into a deep depression which leaves he unable to get out of bed for weeks, Olympia is left to fend for herself. She buys peanuts from a convenience store and eats dinners at friends’ houses.

All the while, Olympia is left frustrated at not knowing where exactly her father left and why (though her mother and her both talk about this ‘Vouley Voo’- a woman her father ran off with), and Olympia eventually learns her father has left for France, presumably with his lover.

Olympia is feeling everything, but does her best to go through her days without alerting any adults to her home situation. She thinks she can “do it on her own,” and help her mother out of bed soon and finishing an art gallery piece she’s commissioned to complete.

But nothing Olympia does gets her mother out of bed, and nowhere is she able to find contact information for her father.

Overall, the book is a nice little mystery, with a kid-feel to it that leaves you feeling all the confusing things a younger, but precocious, girl feels. I thought the writing was clean and neat, like the black lines of Olympia’s favorite Blackwings. The historical facts thrown in added a more “realism” feel to the book and made me want to continue reading. It even had me googling facts to make sure they were true!

What I love is how Olympia gets through her situation without harboring hate or anger – she accepts certain things in life, tries her best to make do, and leans on help when she realizes she needs it.

I loved how Olympia found love beyond her parents and the friends she already had, and was able to extend her social network and repair certain aspects of her life.

I enjoyed the book immensely, and even with an eye injury that affected vision, I cracked open the last few chapters just to make sure that Olympia was going to be alright, after all.