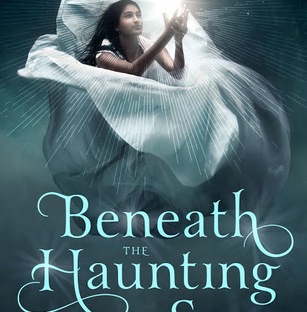 A fairytale-esque fantasy, Beneath the Haunting Sea explores betrayal, bloodlines, and identity.

A fairytale-esque fantasy, Beneath the Haunting Sea explores betrayal, bloodlines, and identity.

I loved the background tales told throughout the book, which gave the novel a dreamlike quality that suits well for a book that focuses on the sea. I loved what I considered to be nods to the tales of Bluebeard and his dead wives, Little Mermaid leaving the sea to be with her prince, an evil sea witch, and even the somewhat gothic elements of Jane Eyre.

Talia, only 16, is soon to be empress. But she doesn’t want to be, especially as she just found out who her real father is. But just before she could take the throne, an old rival seizes control and throws both Talia and her mother into prison. Soon, to the pair are exiled to the most remote part of the empire, a cold, barren landscape by the sea.

But on the voyage, Talia loses her mother, and when she arrives on the doorsteps of an old baron, she quickly learns she is less than nothing: no money, no name, no title, and most of all, no home or mother.

But here, in Ruen-Dahr, the baron’s gothic home, Talia learns about the baron’s old family secrets, and some of her own. Talia realizes she isn’t who she thought she was, and accepts that maybe, just maybe, the gods are real and they have something in store for her.

Beneath the Haunting Sea has that same dreamlike quality that Echo North had, which makes sense, since they’re by the same author. I’m loving the fairy tale feel of the novels, and the retelling mashups of different fairy tales I grew up with.

Follow Reading Between the Dunes on WordPress.com
Join 600 other followers