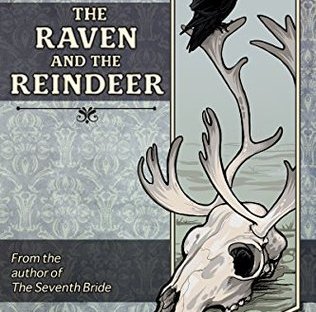 A quick read with a younger voice, this was a different retelling of the Snow Queen, though it kept true to the Snow Queen’s character.

When Gerta’s friend Kay is stolen away by the mysterious Snow Queen, it’s up to Gerta to find him. Her journey will take her through a dangerous land of snow and witchcraft, accompanied only by a bandit and a talking raven. Can she win her friend’s release, or will following her heart take her to unexpected places?

I think The Raven and the Reindeer tried to keep a fairy tale or folkoric feel to it, though it did not always keep to that feel. That’s not necessarily a fault, and it still had a fantastical feel to it, with the typical journey the heroine must take. I loved the animal characters the most – the Raven, Mousebones, and the reindeer who offered his skin so that Gerta could travel the Reindeer Road to find the Snow Queen.

Gerta is a steadfast girl of late teens, though her voice feels much younger, perhaps even early teens or younger. The book has a lower young adult feel to it, or perhaps later middle grade, though some of the scenes were a bit mature or slight violent, such as killing the reindeer. There was LGBTQ touches throughout the story, which added a twist to the original Snow Queen tale, though I felt it pushed the LGBTQ angle just to have it in there.

There was certainly an earthy feel to the book, which was a contrast – or perhaps a support – to the Snow Queen’s icy palace and the blizzards she brought with her where she went. Nature was respected throughout the book, which I appreciated, and life, even animal, was honored and respected.

What I didn’t like was how easily the Snow Queen was defeated. It’s not clear she died, but it seemed that she was ‘defeated’ too easily and imprisoned without much difficulty. Gerta also spent some of that time unconscious, which cheapened the struggle. Gerta’s friends in the otters and the plant roots were the true heroes in bringing down the Snow Queen. Considering Gerta was to be the heroine she didn’t do as much in the end, which was disappointing.

I do wish The Raven and the Reindeer had more depth to it. It seemed the emotions were a bit cold – not as cold as the Snow Queen and the boys whose hearts she ices over – but it still felt distant. Some of the scenes felt rushed, especially when trying to get away from the bandits, and the intentions behind character actions were shallow.

Favorite quotes from The Raven and the Reindeer:

“No matter how pale and pure and perfect you are, the moon is even more perfect.”

“Oh no, a human feeling awkward. How terrible.”

“There is nothing in the world so patient as a plant awaiting spring.”

“Words are like fish and you catch them and you get to keep them forever.”

4 thoughts on “The Raven and the Reindeer by T. Kingfisher – LGBT retelling of The Snow Queen”

Follow Reading Between the Dunes on WordPress.com
Join 605 other followers