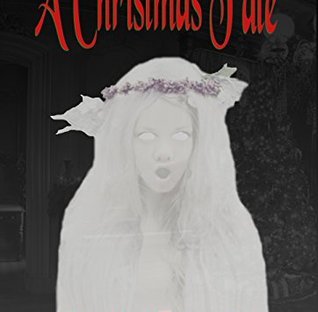 Nothing like dark Yuletide to brighten up the darkest month of the year.

The Krampus and the Old, Dark Christmas: Roots and Rebirth of the Folkloric Devil by Al Ridenour

The Krampus, a folkloric devil associated with St. Nicholas in Alpine Austria and Germany, has been embraced by the American counterculture and is lately skewing mainstream. The new Christmas he seems to embody is ironically closer to an ancient understanding of the holiday as a perilous, haunted season. In the Krampus’ world, witches rule Christmas, and saints can sometimes kill.

The Spirits of Christmas: The Dark Side of the Holidays by Sylvia Shults

What darkness lurks beneath the Season of Lights?

T’was the night before Christmas, and all through the house, not a creature was stirring … but are you sure about that? The dark winter nights can hold many secrets. Sylvia Shults has gathered over 120 tales of Christmas ghosts, giving new meaning to “the dead of winter”. Shults organizes the book around seven themes. They encompass everything from strange Christmas customs (“We Wish You A Merry Christmas … Or Else!”), to the season’s monsters (“He Sees You When You’re Sleeping”), to ghost stories of Christmas (“‘Tis The Season” and “It Came Upon a Midnight Clear”).

During the Victorian era, it became traditional for publishers of newspapers and magazines to print ghost stories during the Christmas season for chilling winter reading by the fireside or candlelight. Now for the first time thirteen of these tales are collected here, including a wide range of stories from a diverse group of authors, some well-known, others anonymous or forgotten. Readers whose only previous experience with Victorian Christmas ghost stories has been Charles Dickens’s A Christmas Carol will be surprised and delighted at the astonishing variety of ghostly tales in this volume.

What do you do when a whole town is haunted?

In 1899, in the North Yorkshire market town of Thorpe Morton, a tragedy occurred; 59 people died at the market hall whilst celebrating Christmas Eve, many of them children. One hundred years on and the spirits of the deceased are restless still, ‘haunting’ the community, refusing to let them forget.

In 1999, psychic investigators Theo Lawson and Ness Patterson are called in to help, sensing immediately on arrival how weighed down the town is. Quickly they discover there’s no safe haven. The past taints everything.

Hurtling towards the anniversary as well as a new millennium, their aim is to move the spirits on, to cleanse the atmosphere so everyone – the living and the dead – can start again. But the spirits prove resistant and soon Theo and Ness are caught up in battle, fighting against something that knows their deepest fears and can twist them in the most dangerous of ways.

We’re thrilled to offer this series of beautifully illustrated, collectible books. Designed and illustrated by the world-renowned cartoonist Seth, they’re trimmed to fit the coziest stocking.

A widower admits it only to himself: Midge’s death is a relief. Yet now that he’s free of her hectoring, he still feels her presence. Does he feel guilty? Or does that weather-beaten tree in the orchard bear an uncanny resemblance to her hunched posture?

Reading a ghost story on Christmas Eve was once as much a part of traditional Christmas celebrations as turkey, eggnog, and Santa Claus.

When he finds an abandoned duck punt on Christmas Eve, a hunter rows out into the marsh and comes across a shipwreck. He climbs aboard to explore—and finds himself trapped when a surge snaps the mooring line and his punt floats away. Sleep eludes him, and soon he discovers that he’s not the only one trapped on the derelict ship.

The Haunted Man and the Ghost’s Bargain by Charles Dickens

Everybody said so. Far be it from me to assert that what everybody says must be true. Everybody is, often, as likely to be wrong as right. In the general experience, everybody has been wrong so often, and it has taken, in most instances, such a weary while to find out how wrong, that the authority is proved to be fallible. Everybody may sometimes be right; “but _that’s_ no rule,” as the ghost of Giles Scroggins says in the ballad. The dread word, GHOST, recalls me. Everybody said he looked like a haunted man. . . .

Nicholas Was… by Neil Gaiman

Nicholas Was… older than sin, and his beard could grow no whiter. He wanted to die. The dwarfish natives of the Arctic caverns did not speak his language, but conversed in their own, twittering tongue, conducted incomprehensible rituals, when they were not actually working in the factories. Once every year they forced him, sobbing and protesting, into Endless Night. During the journey he would stand near every child in the world, leave one of the dwarves’ invisible gifts by its bedside. The children slept, frozen into time. He envied Prometheus and Loki, Sisyphus and Judas. His punishment was harsher…

I am Scrooge: A Zombie Story for Christmas by Adam Roberts

The legendary Ebenezeer Scrooge sits in his house counting money. The boards that he has nailed up over the doors and the windows shudder and shake under the blows from the endless zombie hordes that crowd the streets hungering for his flesh and his miserly braaaaiiiiiinns!

Just how did the happiest day of the year slip into a welter of blood, innards and shambling, ravenous undead on the snowy streets of old London town?

Will the ghosts of Christmas Past, Present and Future be able to stop the world from drowning under a top-hatted and crinolined zombie horde?

Was Tiny Tim’s illness something infinitely more sinister than mere rickets and consumption? Can Scrooge be persuaded to go back to his evil ways, travel back to Christmas past and destroy the brain stem of the tiny, irritatingly cheery Patient Zero?

Ebenezer Scrooge has never been known for the greatness of his heart. A miser, a leech, a penny-pinching old coot… Say what you will about him, though—he’s never actually sucked someone’s blood.
That dubious honor belongs to the vampires who surround him, preying on the weak and laying traps for the strong. They’ve dogged his footsteps since he was born, driving him from the love of his friends, family, and faithful fiancée.

Now, on Christmas Eve, Scrooge’s old friend Jacob Marley rises from the grave to warn him about the evil gathering around him. With three mysterious spirits to guide him, he rediscovers his lost love Belle, toiling fearlessly as a seamstress by day and vampire hunter by night. He sees the secrets of his nephew Fred and his clerk Bob Cratchit, who risk their lives as Belle’s loyal soldiers. And he learns of the plot mounting to attack all of them, starting with the innocent sacrifice of Bob’s son Tiny Tim. . .

Scrooge has only one night to save himself and all that he once treasured—but if he can vanquish the vampires, he might finally earn back the love he cast away. . .

The Twelve Terrors of Christmas by John Updike, Edward Gorey

This long out-of-print classic is the perfect stocking-stuffer for any bah humbug.

A Christmas Tale by Austin Crawley

Few Christmas stories hold as much fascination as the story, A Christmas Carol by Charles Dickens.

Inspired by the Dickens tale, A Christmas Carol, three young women decide to hold a séance to raise the spirits of Christmas Past, Present and Future. They don’t expect a result, but what they call out of the aethyr gives them a creepy holiday they will never forget, if they live to tell the tale!