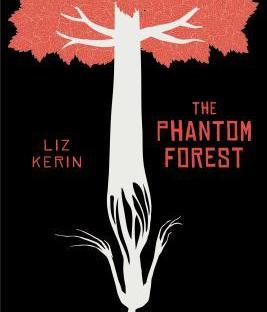 I was in a fantasy reading slump for months – and The Phantom Forest pulled me out of it.

Liz Kerin’s debut novel, The Phantom Forest takes you on a whirlwind journey of hell, demons, the afterlife, death, and revolution.

Humans have breached the Veil and gotten a glimpse of the afterlife – and have a taste for war. With blood shed for years, and too many people dead, Earth is no longer what it was. Even knowing where souls go when their bodies die didn’t stop humans from waging a war that destroyed nearly everything.

Every tree in the sacred Forest of Laida houses a soul. Though each of those souls will return to the mortal world for many future lives, not all of them deserve to.

Emperor Caius rules, with commanders like General Simeon doing his bidding in the territories with the help of Coalition soldiers. However, some still practice the old religion, including human sacrifices to Dohv, god of the underworld. Dohv controls the Savage, a demon who comes out through the Veil and eats the human sacrifice.

Seycia’s parents were murdered by General Simeon when she was but twelve summers old. She took on caring for her younger brother, and the two of them have been inseparable ever since.

Until Seycia is chosen as sacrifice to Dohv and the Savage.

The Phantom Forest had me aching for more, and I dashed through the pages, wanting to know what would happen to Seycia, to the Savage, and even to Dohv, the evil demon warlord. I loved the worldbuilding, and I really enjoyed trying to figure out the mystery of why Seycia was still alive, even after she “died.” What is it about her, and why is the magic fang her father gave her before he died so damn magical?

What I didn’t like was that some points were more stereotypical than anything, including Dohv- we never learn what his deal was and why he was so evil when his three sisters were seemingly so good. I wish more time was spent on details like that. I also thought some scenes were rushed, including pivotal ones, and at some points, aspects of the story jumped, and I had to re-read to understand what I missed.

Drawing together elements of reincarnation, redemption, and rebirth, Kerin weaves a story where even the demons seem more human than the humans.

4 stars for the great storytelling, but 1 star docked because the writing could have been better in terms of technique and tightening. Great read, and I’ll be recommending it to anyone looking for a good fantasy book.