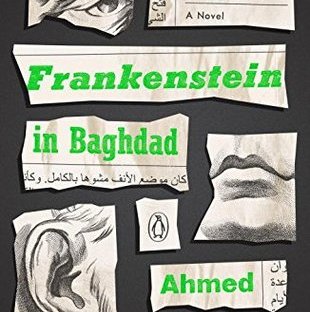 Frankenstein in Baghdad by Ahmed Saadawi, translated by Jonathan Wright

The book features a living corpse, stitched together of different blown-up body parts and made into a what’s-its-name that claims to be on a “grand mission in order to punish, with the help of God and Heaven, all criminals and eventually do justice on Earth.”

From the rubble-strewn streets of U.S.-occupied Baghdad, Hadi–a scavenger and an oddball fixture at a local café–collects human body parts and stitches them together to create a corpse. His goal, he claims, is for the government to recognize the parts as people and to give them proper burial. But when the corpse goes missing, a wave of eerie murders sweeps the city, and reports stream in of a horrendous-looking criminal who, though shot, cannot be killed. Hadi soon realizes he’s created a monster, one that needs human flesh to survive–first from the guilty, and then from anyone in its path.

After his wife and daughter die in a car accident, the protagonist Yehia, a psychiatrist working at the Abbasseya Psychiatric Hospital in Cairo, decides to withdraw from the world and stay in his house for five years. To overcome his depression and loneliness, he resorts to drinking, taking drugs and gambling. But then he receives a dismissal warning from work and goes back to his job at the Forensic Psychiatry Unit, known as 8 Gharb.

Here, surprises await Yehia turning his life upside down. An old friend accused of murder, Sherif, is among the patients he needs to diagnose at 8 Gharb. Sherif has a strange tattoo on his left arm, and spends long hours absent-minded looking at the wall; he also talks to Yehia with two different personalities.

Hoping to find out the truth behind Sherif’s case, Yehia starts a journey of tracking clues, visiting the crime scene and gathering information from Sherif’s sister Lobna. She is married and has a daughter; yet their frequent meetings rekindle their old love that goes back more than a decade.

The protagonist, Aziz, is just an ordinary middle-class zookeeper in Algiers until the abduction of his daughter. The reader must chase along with Aziz, contemplate horrifying choices, and relive Algeria’s many 20th century conflicts in the attempt to get Aziz’s daughter back from a sadistic kidnapper.

Drawn together by the tortured memory of a massacre years ago, a shared experience binds Mathieu, Tahar and Aziz, and has repercussions for Meriem and Chehra, Aziz’s wife and daughter. Chehra is abducted, and the kidnapper’s brutal demands and threats of violent torture turn this into a tense thriller. But how far will Aziz go to save his family?