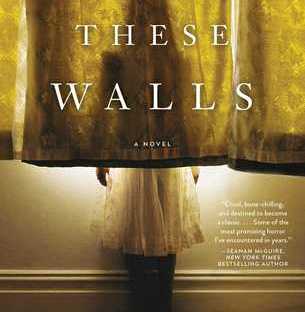 Another spooky one by Ania Ahlborn, Within These Walls is a haunted house-cult leader mixup that kept me on the edge trying to understand what was going on, and kept me in suspense for a while.

Cinematic as usual, Ahlborn’s writing in this book was just as good as her other ones. I can’t say Within These Walls is my favorite of hers or her creepiest, but it’s definitely good, though not up to standards as her other books.

I loved how she shifted between the past and the present and showed the story from both the dead and the living POVs.

I can’t say I understood why some of the characters did what they did, but that’s not a bad thing – some people’s actions aren’t backed by reason. The story wasn’t scary and not as creepy as it could have been, but it was still cinematic and a good exploration of multiple POVs and timelines.

I was surprised by the ending, and, as usual, Ahlborn ends her books with delicious questions rather than resolved storylines.

Favorite quotes from Within These Walls:

In some ways, writing books is like giving yourself eternal life, isn’t it?

Stories about murder and darkness had a definite pull; they were alluring in how forbidden they were.