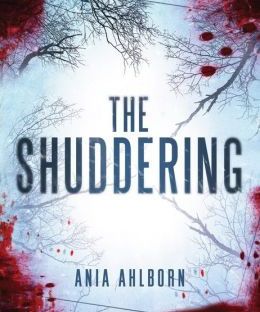 Ania Ahlborn does it again. She has quickly become one of my favorite creepy authors, and The Shuddering is another on her list of thrilling books.

The Shuddering is cinematic. Violently disturbing, it reads like movie scenes, with characters – both human and demon – behaving in dramatic and condemning ways.

The book starts off mid-action and does.not.stop.

“He was too busy listening to her hum, her singing blocking out the silence of winter, distracting him from the tearing of his own flesh.“

When Ryan and Jane decide to head up to their family’s cabin one last time before it’s sold, they expect to enjoy time snowboarding and reminiscing. Ryan invites his best friend Sawyer, Jane’s high school love, and his girlfriend, in the hopes that Sawyer and Jane would get back together. Jane brings her best friend Lauren into the mix, and the five of them settle into the cabin, however awkward they feel.

But the snow is falling heavy around them, bringing out demons who feed on flesh – including human. The five in the cabin don’t know yet, but the creatures are lurking nearby, hungry, intelligent, and inhumanly strong. They’ve already killed other snowboarders, and they’re hunting for more.

The book is riddled with violence and gore, but not to the point of being inane or worthless. Ania’s crisp and sharp writing is clear in this book – she writes in clipped descriptions, each scene reading like a cinematic experience.

And with her characteristic wicked endings, The Shuddering did not fail to end in an unpleasant and heart-stopping way. I read the book in one sitting. More than once, I found my body coiled and tight, fearing the worst about to happen to the characters.

Ania Ahlborn is a master storyteller and The Shuddering is a literary cinematic experience.

Favorite quotes from The Shuddering:

“He was too busy listening to her hum, her singing blocking out the silence of winter, distracting him from the tearing of his own flesh.”