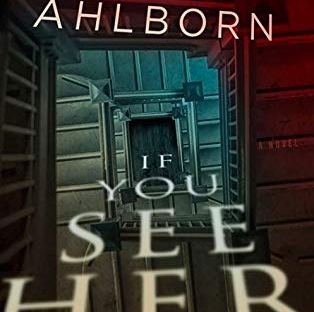 Ania Ahlborn has quickly become one of my favorite creepy authors. I’ve devoured several of her books, including Brother, The Neighbors, and The Devil Crept in. Now I can include If You See Her to that list.

If You See Her is a typical, and maybe even stereotypical haunted house story. But it’s oh-so-good with Ahlborn’s wickedly tight writing.

The book is clawed through with suspense, and while reading most of it in one sitting, I was unnerved and sufficiently spooked.

Ahlborn does fantastic work crafting her main characters and bringing the dead girl’s ghost to life in a ruthless and demonic way. I didn’t find the story original, considering it’s the typical demon-possessed-house-that-needs-host kind of story, but Ahlborn’s fresh and tense writing brings the house, the ghost, and even the dead sleepy town to life.

I felt trapped as Jesse, the main character, did, in his dead-end job, in a dead-end town, and rapidly, a deadening marriage. He’s losing his hold on reality, and I felt for him. With his friends also haunted by the demon in the house, or perhaps, the demon of the house, Jesse and his pals all end up falling prey to the demon.

What I both liked and didn’t like (in a good way!), though, was in not understanding the origins of the demon. I wanted to know: where and how it lived and came to haunt people. And though I understand that sometimes, we just don’t know about demons, I still wanted to know. How did it first end up haunting little Georgiana (the ghost girl who became the demon’s host), why did it choose who it did. Why were some so attracted to the house on Old Mill Road that the demon possessed that they kept coming back again and again?

These questions only add to the unnerving feel of the book. If you like creepy and unsettling, If You See Her is for you.

One thought on “31 Days of Spooky Reads: If You See Her”