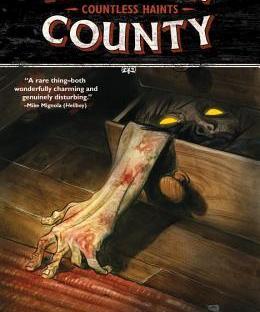 Holy hell this series is bingeable! I’m just starting out reading graphic novels and decided that a good horror one would be right up my alley. Witches, the living dead, necromancers, good/evil twin, and more!

Harrow County volumes 1 – 8 left me gasping as I devoured most of the volumes in one day.

The storyline, characters, the magic, the creepiness, and the ART was sooooooo good! If you like gory, creepy, and unnerving, read Harrow County. The art alone is worth it.

Each volume was a continuation of the Emmy’s story as she navigates learning she was born of an evil witch. But there’s more to her than the evil witch’s blood running in her veins. And there’s more to the other characters than meets the eye. This is more than a lynched-witch-comes-back-to-life-to-seek-revenge story. It’s more a create your own life, despite what you think your bloodline compels you to be/do. It’s about rising above your circumstances, and even above your nature, to do what is just and right.

Besides the creepy factor, the depth of the plot itself kept me going back for me and kept me bingeing the volumes as I drank chai in a local cafe.

What I absolutely loved was how different characters had different vernaculars. And yes, I realize this is a feature of graphic novels, but the way it was drawn out in Harrow County made me feel more immersed in the story. Harrow County isn’t just about the artwork and some scripted panels: it was an entire story, an artistic novel.

Each character was its own person. Yes you have the cliche witch who’s hungry for power and will stop at nothing to get it, but then you have the skin boy, who despite being one foot in life and one in death, acts as human as Emmy. Then you have Lovey, the witch doctor of sorts, and Bernice, her apprentice-in-the-making.

You can’t forget the dragonflies, or the “snake doctors,” or the cottonmouths that seems to be everywhere and anywhere.

With a strong female protagonist and other characters, and exotic antagonists, Harrow County will keep you in its grip until the bloody end.

The behind the scenes at the end of each volume was also interesting in its own right. You don’t realize just how much work goes into the making of well-done graphic novels until you see the effort and planning put in by everyone involved.