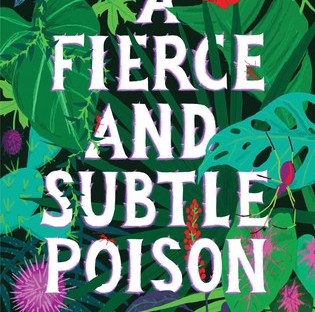 Maddeningly beautiful, I loved the lushness and richness of A Fierce and Subtle Poison. Beautifully written, as wild as the islands, and as mystical as a witch.

Maddeningly beautiful, I loved the lushness and richness of A Fierce and Subtle Poison. Beautifully written, as wild as the islands, and as mystical as a witch.

One of the better books I’ve read this year, and a book that pulled me out of a reading slump, A Fierce and Subtle Poison more than deserves its hype.

Everyone knows the legends about the cursed girl–Isabel, the one the señoras whisper about. They say she has green skin and grass for hair, and she feeds on the poisonous plants that fill her family’s Caribbean island garden. Some say she can grant wishes; some say her touch can kill.

The story follows seventeen-year-old Lucas, the gringo of the island. His father owns the luxury hotel, and so they’re wealthy, and everyone knows. But Lucas tries to fit in. He listens to the tales the abuelas and senoras tell, of the witch girl who lives in the house, where a scientist once lived, and whose wife either died or left. No one knows for sure, but everyone has a story about the little poison witch.

What everyone knows, though, is that if you throw a wish over the wall, the witch might grant you it.

And so Lucas writes down his wish and throws it over the old stone wall, into the witch’s garden.

He finds that paper, crumbled, and creased, folded, and refolded, slipped under the door of his bedroom in the hotel he lives in with his father. The witch, presumably, has written: That is a wish I can’t grant you.

Lucas is confused, but in the midst of this confusion, his new girl goes missing. Then she’s found – dead and bloated, washed up on the beach, with scratches and tears at her skin that the police say are from nibbling fish, but who know better than that.

The story is so rich, I almost felt the mugginess and the humidity as I read. I felt absorbed in the town, the island, the language (Spanish words are used throughout the story).

Though I do think some of the plot was a bit unrealistic, I did think the writing was tight and lush, providing atmosphere like a Caribbean Rebecca.

View all posts by Reading Between the Dunes