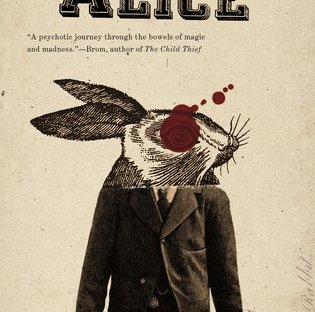 A grotesque reimagining of Lewis Carroll’s Alice in Wonderland, Alice takes you down the rabbit hole into something more violent and bloody than Carroll ever imagined.

But though that would normally be right up my alley (or down my rabbit hole), I found it creepy but uninspired.

In a warren of crumbling buildings called the Old City, a hospital echoes with the screams of the poor souls inside. Inside, there is a woman. Her hair, once blond, hangs in tangles down her back. She doesn’t remember why she’s in such a terrible place. Just a tea party long ago, and long ears, and blood…Then, one night, a fire at the hospital gives the woman a chance to escape, leaving her free to uncover the truth about what happened to her all those years ago.

I was impatient to finish the book, not because it was good and I wanted to find out what happens, but because I wanted it to end. I did think Alice was an adult’s retelling of the childhood story, ripe with rape, human trafficking, violence, and thugs. Of course, there is also madness, with the character from the childhood story reimagined as adults with dark histories and violent behaviors. And that should have been more than enough to keep the story going. I don’t know if it was the writing that strained to mimic the original Alice in Wonderland, or if it was the forced grotesqueness and horror, but the story didn’t do it for me.

I had high hopes for Alice, as I usually love dark reimaginings, but this one had all the darkness and blood, with none of the feeling I needed. There was a disconnect between Alice and me as I read her, as if viewing her story through a scratched and murky looking glass.

I’ll give Christina Henry another try as I already bought The Girl in Red, and, like I said, I do love dark retellings. Hopefully the Little Red Riding Hood reimagining plays out better than the Alice in Wonderland retelling.

“You’re only a mouse if you let them make you one.”

“It made Alice realize how much of life was full of empty stuff, objects longed for because the hope of them made your small life seem bigger, better, brighter.”

“There is more to you than you know. Remember that.”

“Things that are worth nothing are easy to come by.”