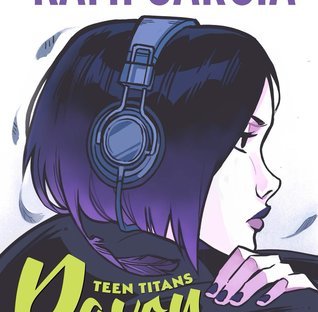 I don’t know much about Raven besides the snapshots I remember from my cartoon days, but she’s always been my favorite Teen Titan in the old Cartoon Network series. When I found a graphic Novel at Comic Logic in Virginia about Raven, I had to get it.

I enjoyed Kami Garcia’s take on Raven’s backstory, including her parental lineage, her powers, and her family.

When a tragic accident takes the life of 17-year-old Raven Roth’s foster mom—and Raven’s memory—she moves to New Orleans to recover and finish her senior year of high school.

The story and writing has a YA feel to it, very teen-like, but I expected that, considering Raven is, you know, a teen. Kami stuck to Raven’s voice as a teenager, and I’m glad she did. This makes it easier to slip into Raven’s mind as she is, and to feel what she’s going through more empathetically.

She’s going through typical teenage things, like figuring out if Tommy likes her, but there’s also a deeper level of her figuring out her powers and what danger lurk around the corner.

I loved how Raven’s aunt and cousin are voodoo witches. With the introduction of supernatural beings under their control, the story added a whole new element that I think could grow into something mystical if the Raven series continues. The voodoo elements were cliche in some ways, but I still think they are worthwhile and am glad they were added to the story. This leaves Raven with a loving family (living and dead) behind her.

The illustrations (Gabriel Picolo) were gorgeous, and brought to life Raven’s personality, from the color scheme to what t-shirts she wore (e.g.black is my favorite color t-shirt). Everything was beautifully done and with attention to details that added more character depth beyond the story text itself.

As much as I never cared a lot for the other Teen Titans, I’m looking forward to more of Kami Garcia. At the end of Raven, there was an excerpt on Beast Boy, and as much as I never was interested in him in the cartoons, I loved how Kami introduced him. She writes well and I think she does the Titans the justice they deserve.