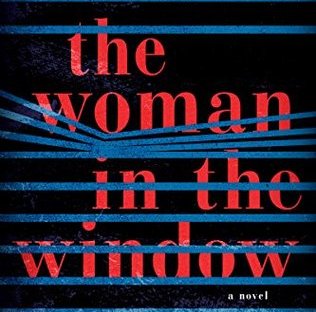 I’ve been itching to read The Woman in the Window for a long while now after hearing how superb it was.

It did not disappoint.

The book centers on Anna, an agoraphobe living in NYC with a PhD in psychology who used to treat younger children.

After a car accident in Vermont with her family, Anna shuts herself from the world in her house and becomes a busybody. She watches her neighbors from a window in her house, using a zooming lens on her Nikon. She follows a ladies bookclub from afar, finding the book they’re reading online and zooming in on their sessions with her camera. She holds conversations with the ladies in her head, imagining herself laughing and talking with them and discussing the merits of whatever book they’re reading. She watches her other neighbors’ coming and going, memorizing their schedule and learning more about them by searching online.

Even though that seems creepy and wrong, you can’t help but feel for Anna, who’s trying to maintain her connection to others in the best way she can. She even has a tenant – David, who lives in the basement and helps her with errands and fixing things around the house.

One day, she meets a new neighbor – Jane Russell, who makes Anna feel a little more normal and alive. They talk about themselves a bit, play chess, and Jane sketches Anna on a slip of paper, which Anna saves.

A few days later, Anna is spying on the Russells through her window when she spots Jane – bleeding, with something glinting through her chest.

Anna doesn’t know what to do – she leaves her house but collapses on the sidewalk and passes out (she’s an agoraphobe, remember). When she comes to, she’s in a hospital, the police questioning her, and Jane is nowhere to be found.

Later, Alistair Russell, Jane’s husband, brings his wife over to Anna. Except, the Jane he claims is his wife isn’t the Jane Anna met and saw stabbed.

The police don’t believe Anna and tell her to let things go.

The story is whirlwind of past entanglements and lies, mistakes made and the consequences to those mistakes.

With everyone lying, it’s hard to tease out the truths and put them together into a solid picture.

But Anna does, leaving an ending I didn’t expect.

Well-written, with an intelligent and aware character voice, I LOVED this book. The plot sucked me in, and the voice – I haven’t come across a character voice that – charismatic? personable? likable? I’m not sure how to describe it. But I hope more books come out with a voice like Anna’s.

I felt for Anna, felt just as pained and frustrated at herself as she was, and wanted her to heal from her past. She’s a powerful character who, if she were a real person, I’d want to be friends with – talking voices and all. Even though she drank too much and isn’t responsible with her medications (she doesn’t take them on time or takes too much, and they shouldn’t be mixed with alcohol), I still wanted her to “win.”

The book had me guessing and second-guessing whodunit. Was it Alistair Russell? David? Or did Anna imagine it all?

The way the book ended I didn’t expect, but it all made sense in a creepy way.

Favorite quotes from The Woman in the Window:

“Watching is like nature photography: You don’t interfere with the wildlife.”

“This is classic therapist argot: It sounds to me. What I’m hearing. I think you’re saying. We’re interpreters. We’re translators.”

View all posts by Reading Between the Dunes