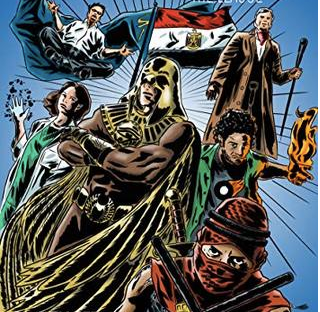 “It was about time the world saw Egypt not through a Western lens, but through an authentically Egyptian one.”

I have been excited for the English translation of “El3osba,” which means ‘The League’ in Arabic. (In keyboard arabic, certain numbers stand for sounds, for example, “3” stands for the Arabic letter “ayn”).

“What is present day Egypt, like New York, Gotham, or Metropolis had its own costumed superheroes?”

“…’The League’ is a team of Egyptian superheroes from different backgrounds of Egyptian society who come together to fight corruption and evil in the hopes of restoring Egypt to its former glory. In the hopes of reminding Egyptians that each one of us has within themselves the power to change reality itself…”

Alpha discovers a “different Earth,” one where heroes never surrender to cruel circumstances and who find a way no matter what, and fight the ugliness in human nature. Whose “poverty and hardships are not their motivation, not their weakness.” Alpha is the parallel Earth character, who discovers worlds that exist parallel to ours and who witnesses possibilities. Based on human emotions, Alpha’s attention has been captured by our Earth, so he’s decided to rebel against his and come down to ours to assemble a superhero team.

I loved in Story One” The Birth of Horus, features a corrupt government worker who “will never finish someone’s paperwork without a sweet little extra ‘cash’.” I’ve seen this in other Middle Eastern countries, where nothing gets done for weeks unless employees are paid a bribe. And right here, in the first chapter, a corrupt employee is exposed for what he is.

“When you’re faced with corruption that is beyond the ordinary…you have to find extraordinary ways to right it back.”

Horus, in Egyptian mythology, is the primary deity, and the one who protected the the pharaoh. The Eye of Horus, or the wadjat, is a symbol that represents protection:

and so Horus, in the graphic novel, is the one who watches and punishes the guilty, whoever defends the guilty, and whoever condemns the innocent. He kicks off his hero skills when someone he considered family was brutally murdered. He eventually becomes the “Vengeful Judge.”

In Story Two, we meet Elwalhan, the Bedouin mercenary. His first mission was to blow up an ambulance, but at the last minute, he changed his mind, but was never heard from again after choosing to start life anew in the city, rather than returning to the desert.

I definitely wanted more, especially as this first novel was an introduction to only some of the characters. But of what I saw so far, I’m already itching for the next English copy, and I’ll be keeping an eye out for it!