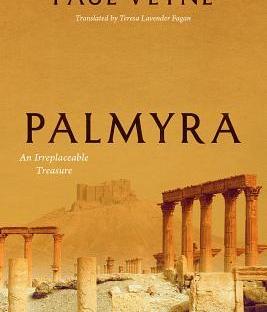 I loved this book. A short historical work on Palmyra during ancient Roman times. The book is dedicated to Khaled al-Assad, head of antiquities for Palmyra for 40 years who was murdered by ISIS, and who was perhaps the greatest Palmyra expert in the world before his death.

Being human, and moreso, of Syrian heritage, it pains me when I see Syrian artifacts being destroyed. With ISIS’ destruction of many Palmyran antiquities, we’ve lost so much history and culture that can never be replaced except by replicas.

A french historian and specialist on ancient Rome, Paul Veyne has resurrected Palmyra’a glory days, showing her power, beauty, and history in such ways that I felt both proud and pained for all that Syria has been, and all that she’s lost.

Palmyra: An Irreplaceable Treasure is a beautiful telling of some of the history of Palmyra, Syria, and a telling that respected its unique culture and the beauty and loss of its ancient artifacts at the hands of ISIS.

For anyone who loves history, for anyone who is pained by the lost of human works, this book is for you. Paul Veyne clearly loves Palmyra, and has such a deep respect for it. Even if you have never heard of this caravan site in ancient Syria, you will fall in love with it’s majesty and the cleverness of some of its rulers.

Veyne wove in enough ancient Roman tradition and Arab culture to make sure you can understand Palmyra’s exquisite role in history and how it became such an integral city of ancient times.

I highly recommend this book. Included are photographs that show Palmyra’s beauty, and well as some of its destruction. But Syria has always risen from the ashes of its past, and it will rise again.